You are great, please retweet

So, I was thinking about this as I was trying to watch MegaPython vs. Gatoroid on SyFy last night. I say trying to watch because it was pretty much unwatchable. You know, I have no problem with cheesy SF movies, or even bad ones if they are at least trying a little bit, but this was just plain bad. I know what they were doing, people thought it was funny to see former teen idols Tiffany and Debbie Gibson in some of their bad movies, so they thought they'd put them in one together. Then have them fight. Awesome.

Don't get me wrong. I wanted to check this out. I thought if it was done right it could be fun. But it wasn't. Done right, or fun, that is. Look, I don't know if it was them or the directors but Tiffany and Debbie (sorry, Deborah) were lousy in this movie. It's hard to enjoy the cheesiness if they suck so bad that it hurts your ears and eyes to watch them. Also, I know they wanted to have them fight, I mean, how else are you going to get the guys to watch it, but there was never any reason for them to have conflict. Sure, Tiffany wanted to protect her gators that were eaten by the snakes that Debbie was trying to save, but why do they hate each other? If they really cared about wildlife they would work together on a solution. I mean, who loves snakes that much but hates gators? They are basically the same thing just with one of them missing legs.

Anyway, I'm not going into the whole movie because I didn't watch the whole thing. I couldn't. What got me going was all the tweets I saw SyFy retweeting from people who said it was awesome. That got me thinking, how many of those people were tweeting that so they would get retweeted? Those of you on Twitter know what I'm talking about, right? There are so many out there, not the spambots, that seem to tweet praise on something silly just to get retweeted and maybe more followers. Don't get me wrong, I'll tweet stuff to people with many more followers, or who are famous in one way or another, but I do it because I think that person might think it's funny. I don't hope for retweets or even a response. It's mostly to amuse myself and possibly them.

I'm not sure any of that made sense.

This also brings me to Facebook and what I hate about it. Besides all the quizzes and stupid things people do, I really hate a few specific things that people post. First is chain letters. Or at least the digital equivalent. Any post on Facebook that starts with, "I know 95% of you won't do this..." I automatically skip. I know that person didn't write it, so it doesn't bother me. Plus, they know I'm not going to anyway, it says so right in their post.

Then we have the vague sympathy posts. You know what I mean. "Blank is sad today" or, "Blank needs to do some thinking." Look, if you have something to say, just say it. Why are you sad? Just tell me and maybe I'll say something. If you do this stuff I'm going to ignore it. I do the same thing in person. Have you ever been around some one who will keep sighing or hinting that they want you to ask about something? We've all seen that I'm sure. I may be a jerk, but I totally ignore it. Sure it's mean, but if you just told me what the problem was I would talk to you about it. I'm not heartless, I just don't think I need to be forced to ask what is wrong.

Yeah, I know I kind of sound like a jerk here, but I'm really a nice guy. Just easily irritated. Can guys have PMS? Maybe that's my problem today.

It's been a busy week so far. Yes, I know it is only Monday, but we had the big Chicago Bears game on Sunday, Jenn left for Toronto on Sunday, and, well, Jenn left for Toronto, so I'm all alone here. Okay, the kids are here, but they are the problem. I have to make sure they are fed, have their homework done, have a lunch for school and don't kill each other. That is a lot for one man to do. Women do that all the time, I know, but I'm a guy. That's just too much for me to think about. I need to reduce it by a third at least. That's why I decided I'm not going to feed the dogs at all while Jenn is gone. They can find something outside, I'm sure. Cruise is always chasing squirrels out there. Maybe now he'll actually try to catch one instead of his half-hearted attempts he makes now to show off to the other dogs in the neighborhood.
Here's an example of my ineptitude. Jenn reminded me to help our daughter with her math homework that was due today. No problem. I'll get to it after the football game. And, yes, we did get to it. I explained how to count the coins and how to find a way to make a certain amount of money in various coin combinations. I think she even got it. Her teacher, however, never got it. The homework that is. When I picked up the kids at school I asked them if they had any homework. My daughter said yes, that her teacher told her she could turn in her homework tomorrow even though it was due today. Huh? Somehow we did the homework but it never made it to the school. I thought I put it in her back back, but I guess I didn't. It is nowhere to be found. I even went through some of the garbage. I have no idea where it is. So now tomorrow I have to go and ask if we can get another sheet to do. I'm sure if I explain that Jenn is out of town she'll give me that look that women give to dads who are clueless and give me another one with no problems.
At least I remembered to give the kids dinner tonight.
What else? We had our son's ninth birthday party on Saturday. For some reason we thought it would be a good idea to invite his class here. While it turned out well, and the kids had fun, we were both exhausted from it. Luckily, Jenn's parents and sister helped out. I don't know if we could have done it without them. It was also nice of all the parents to show up right on time to pick up the kids. I mean that, they were right on time. They all said they figured we'd be ready to have the kids out after three hours. Yes, we were. The kids were pretty well behaved, but they can only last so long inside a house before they go bonkers. It would have been nice if our son was born in the summer so all the kids could have gone in the yard to run around.
Did I mention it was a Mad Scientist Party? Yeah, here's me being an even bigger dork than normal in a blurry cellphone photo. 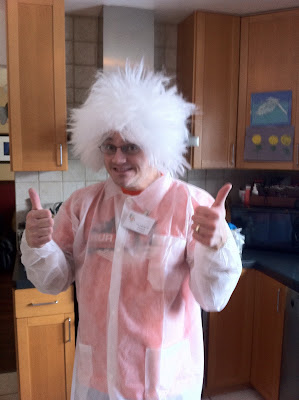 Did I also tell you I'm going to be Young Doc Brown in The Further Adventures of Marty McFly?
With that, I'm out.
Posted by Mike at 8:15 PM 4 comments:

This makes me laugh 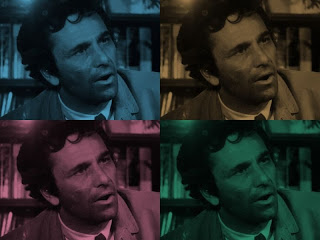 I made this the other day on my iPhone and it cracks me up for some reason. I posted it on Tumblr, but if I want anyone to see it at all, I should post it here too.
Posted by Mike at 12:31 AM 4 comments:

My son is turning nine and I'm getting old

Today our son turns nine. The last year of single digits. The big 9. So that makes me at least...um...25-ish? I stopped counting anyway.

So, yes, nine years ago we took our little bundle of joy home and immediately forgot what it is like to get a good night's sleep. Sure, it was totally worth it. I mean, there are better things to do than sleep. You know, like picking up toys, spending the early morning hours in the ER waiting for someone to just give you a prescription, and maybe some ear plugs, calling doctors at insane hours to ask them stupid questions, waking up and thinking your kid is calling out to you and going in there to find out they are stuffed up and their breathing sounds like them calling through the baby monitor. (Yes, that really happened.)  I figure in nine years I've been shorted about 8 years of sleep. All I know is that when the kids are gone to college I'm spending two weeks in bed. (Sleeping! Get your minds out of the gutter!)

Obviously I'm joking (mostly) and wouldn't change a thing. Well, except for that time when he found some dog puke and decided to taste test it. That was a gross thing I could have done without.

Anyway, Happy Birthday, buddy! Enjoy this year, it all goes downhill at 10.

(Warning. Some strong language ahead, hide your children's eyes.)

Let me start by saying Fuck You. Yeah, you heard me. I'm not the only one saying it, believe me.

In case you haven't heard, Illinois just jacked up the personal tax rate by 2 percent overnight. Yep, you read that right, overnight. They were like teenagers sneaking out of the house to go to a party that they we forbidden to go to. Why did they do it in the middle of the night? They had no choice. This was a lame duck session and many new Republicans were going to come in and the Democrats would not have the votes to pass this after today. Nice, huh?

Now, I'm not an idiot. I know our state has fiscal problems, many do, but I also don't think that we taxpayers created all these problems. Actually, we probably created none of them. Sure, you can blame Blagojevich for the mess he made, but he wasn't there the last year-and-a-half or so. Also, he definitely wasn't there last night when you guys were all hiding under your covers with flashlights voting in the increases when you should have been asleep.

Not only our the people getting screwed over, but the corporate tax rate is going up about 2 percent as well. Yes, this is a real good time to charge companies more taxes. It's not like we have a joblessness problem or anything. Hell, the governor of Wisconsin is already out there saying, "Come to Wisconsin. We won't screw you." (No, he didn't actually say that. But it certainly was implied.)

So, basically they have jacked up all the taxes and pretty much have said nothing about what they are doing to cut spending. Thanks, guys!

Oh, and get this. Not only did they do this under the cover of night, they also have made it retroactive to January first. That's like kicking a guy in the balls after you have already knocked him unconscious. Dicks.

The funny thing about all this, I generally consider myself a Democrat.

Okay, I need a drink. 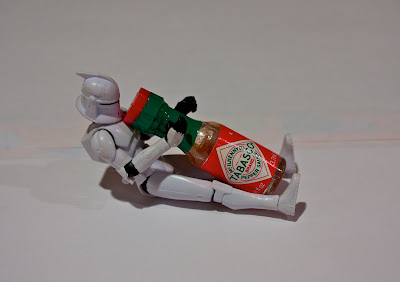