In honor of getting the Internet back...

Here is something from the Way Back Machine. I'm not sure when this was, but I'm guessing it was 1992, or close to it. For some reason I decided to go all out for Halloween. I never did that before, not even when I was a kid, so I don't know what got into me this particular year. (No, it wasn't booze. Well, at least not when I bought this stuff).

Anyway, Jenn and I were at some Halloween shop and I saw this Klingon kit. Now I watched Star Trek, but I wasn't a super huge fan. At least not enough to dress up as a Klingon. Or so I thought. So, yes, I bought the kit with the wig and ridged forehead and the makeup. It turned out okay for my lack of skills in the makeup department. I know that the guy throwing the party didn't recognize me. Anyway, here you go. Laugh it up, fuzz ball. Wait, that's the wrong movie... 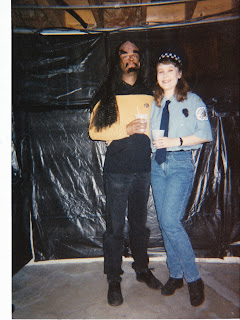 I look kid of bad ass, don't you think? Well, except for the straw in my beer cup. I had no choice! That stupid beard thing kept getting in the cup. You didn't expect me to got to a party and not drink beer, did you?
I hope you all had a good laugh.
I don't know why I post these things...
Posted by Mike at 9:01 PM 3 comments:

Our Summer Vacation Part 1: The Beginning

Like I promised in my last post, I'm back to talk about our vacation. I hope you can contain your excitement!

Some time last year, I can't remember exactly when, I was at work and Jenn had gone to her parents with the kids and when she came back we somehow had plans to all go to Hawaii this summer. Don't get me wrong, I didn't complain at all, I was more surprised than anything. After a year of figuring out where, and exactly when to go, we decided on renting a house in Kailua-Kona. By this point Jenn's sister and boyfriend dropped out, but we found a great place to stay on the water. Okay, Jenn found it, are you happy?

Seriously though, this place was perfect. There were three bedrooms and a nice patio (lanai) to look out on the water. Check out the view to the East: 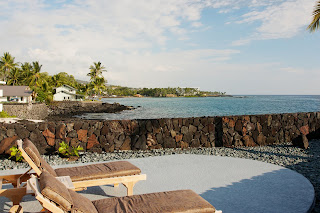 And to the West: 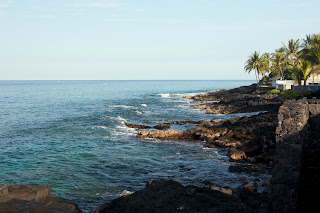 You can't get much better than that. And, since we were splitting the cost, we didn't spend anymore than we would have on a hotel. Our plan was to save a bunch of money on food since we were at a house where we could cook. Well, we did eat breakfast over there, but that is about it. But, I'm getting ahead of myself.
See, the vacation didn't start off so well. Before the vacation even started we had medical problems. From the beginning of July until we left either my mom, stepmom or dad were in the hospital at some points. All with different illnesses with various degrees of severity. Everyone is out now, but my mom got out two days before we left and my stepmom got out about two days after we were in Hawaii. Then, to top it all off our flight to San Francisco was cancelled the night before we left.
Since I work in the airline business, we planned to fly stand-by all the way out to Kona. Well, once that flight cancelled it threw a wrench into everything. To make it short, we bought tickets to get to San Francisco. We were supposed to be there about 11am, but ended up getting there around dinner time. And with a lot less money. But, hey, we were halfway there!
The next morning was better, we got out on the flight we wanted. We were split up on the plane, but it was no big deal. I got to sit next to a very nice guy who had a house out on the Big Island where he spends most of the summer. He gave us some nice tips about the island and was probably the nicest person I've ever sat next to on a plane.
Anyway, we got to the Kona airport, which is an awesome open-air small airport around 1pm to start off our vacation. I tried to wait at the bottom of the stairs (no jet ways here, people) to take Jenn's and the kid's picture coming off the plane, but I was told I couldn't wait around down there if I wasn't waiting for a stroller.  It may seem like a laid back airport since it is wide open, but they still follow their security procedures.
After we shoved 47 days worth of luggage into the rental minivan, we headed out to town to get something to eat on the water. We ended up at Huggo's, a nice causal place on the water. We spent about 45 minutes there and I got sunburn on the side of my neck. I took the one little spot with no shade to spare the kids. After lunch we headed to the beach to wait about an hour until we could get into the house. This was the first time the kids had been in the ocean and they loved it, once they got used to the waves that is.
Finally, we headed to the house to unpack and get some groceries. This little (actually big) guy greeted us in the kitchen. I assume this guy promotes good eating and digestion. 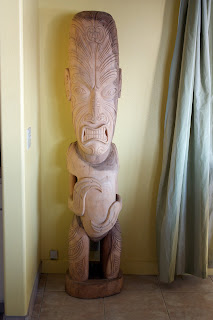 I was a little worried about how warm the house was when we first got there since there was no central air. But, once we had the a/c units running in the bedrooms and opened the windows to let the ocean breeze in, it wan't too bad. 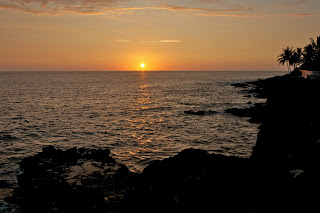 We got to watch the first sunset on the water and plan our attack for the week. Our first full day was a casual plan of hitting the beach. We knew we'd be tired because of the time change. And boy, were we. The kids were probably the worst, but we all were dragging by about 6pm. We grilled up some food, and hit the sack early.
I'll stop here for now, but stay tuned for dolphins, helicopters and volcanoes!
Posted by Mike at 9:51 PM 5 comments: