Today I got the call I was expecting, but was still hoping wouldn't come for a while yet. My step-mom, Mary passed away today. She had been sick for awhile. Actually we thought she wouldn't make it until Christmas, but I think through sheer will, she did.
She's spent the last month at home with my dad, but she was no longer getting any treatment for either the cancer she had, or the bacterial infection in her lungs that she has been fighting for several years now. They sent her home with in-home hospice care, which is never a fun word, and couldn't treat her for her ailments because she was just too weak to handle them. The Friday before Christmas was the day they made the decision to stop the treatments. That was the day I went to the hospital thinking it was the last time I'd see her. Luckily it wasn't, but I'd obviously like more time. Much more.
But, the thing is, she was in a lot of pain in the end. She was getting a ton of pain meds and that is not fun for anyone. Now she is pain-free. That is the blessing.
Now, Mary was technically my step-mom, but my dad and her had been married 41 years. I'm 42, so it's not like I know anything different. Basically, it was like I had two moms. I never lived with my dad and Mary, but I'd say she was as close to a biological mother as you could get, without the actual biology.
She taught me a lot of things over the years. She taught how to appreciate antiques (she had a ton of old stuff), she taught me latch-hooking when it was all the craze, she taught me that plants should not die when they are in your possession. I need to work on that last one.
One funny memory. I was maybe 9 or 10 years-old and we were on vacation in Wisconsin. We rented a house, we needed it when all the kids were together, and I was the last one eating breakfast. She asked if I wanted another piece of French toast and I said, "Nah." But I guess she thought I said "yeah" and gave me another one. The problem was I was stuffed and couldn't possible eat another bite. She came back and said I better eat it since I asked for it. I didn't want to say she hear me wrong so I wrapped it in a paper napkin and went into the bedroom and threw it away. Being a smart kid, I didn't just toss it in the trash, I put it under the bag that was in the small can, thus concealing it. Really all I did was have her find it later. At least I assume. She never said anything, but there is no way she didn't find it. So I guess she also taught me to not waste food and that parents are smarter than kids.
My big worry now is my dad. He's going to be alone for the first time ever. Yes, he's been divorced, but I don't think there was a long gap and this is much different.  The good thing is he has seven kids and many grandkids to keep him busy. That is our job now, to look out for him and try to fill the whole left by Mary's passing. Keeping him busy will help me, too. At least I hope so, because when I'm not doing anything that's when I remember she is gone. It's going to take a while to get used to that.
Here's a picture of Mary with my brother and I from 1981. I think we were in Florida. Pardon the crappy scan quality. 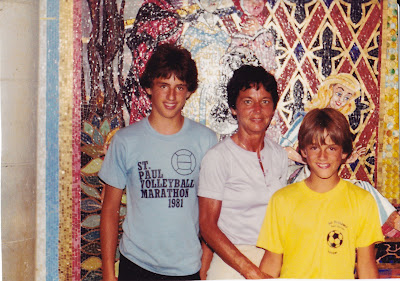 Okay, I have to try and get some sleep. I'll probably have more to say after this is all over, but this is going to be an exhausting week.
Posted by Mike at 10:35 PM 4 comments:

This is why insomnia is good for me.

If you know me at all, you know I love a great commercial. And by great I mean terrible.  Well, I have not one, but two, for you today. But only if you call within the next ten minutes.

First up, exercise equipment. We all want to look great, right? We want ripped abs, if your a guy, strong shoulders, nice pipes, etc. Though, funny enough, we must not care about our legs, guys, as we never see a good machine on TV to get rid of the dreaded Bird Legs. Anyway, today we have a new exercise machine. One like you've never seen before. Well, you've never seen it if you are under 70 or healthy. Take a look and see what I mean.

Okay, what does that make you think of? Yes, it's a walker! Like you're grandma uses! If you pay attention to the first five seconds of the video you will swear the guy can't walk and is using it to assist him in moving about.

To be fair, maybe somebody who went through, or witnessed someone going through, some heavy physical therapy and noticed how much the upper body can develop in those situations. But, come on! Don't have some totally ripped dude walking around with the Ultra Walker like he got that strong doing dips and push ups.

Also, curls with this thing? Can you make it anymore awkward, Chandler? This thing weighs 30lbs, right? Can you imagine moving something around that weighs thirty pounds that is shaped like this? It has to be terribly awkward swinging that thing around the house to shove it under your bed, where it will likely sit gathering dust. Until you hit 80 and need it, that is.


Next up, a computer keyboard for old farts. Okay, there is a need for keyboards with large print, I understand that, but this commercial is the problem. And the website. They don't have a video I can embed (their loss) so I have to link to the page. Please, go and look at it. I'll be right here.

Done? First, the good. Like I said, there are people that need this kind of keyboard for various reasons. Also, it's waterproof. Or so they say. That's pretty neat! I'm a total slob and could use something like that in a hideous keyboard.

Now the bad. Look at the website again. Watch the images that pop up on the right side showing all the benefits you get by buying this keyboard.

First, why is the guy with an install CD all covered in grease and holding broken cables? What the hell did he do, pull shit out of his car to try and install some drivers? I mean, really. Who could possible get that dirty running some software? Is his house in the middle of a coal mine or something?

Second, who they hell Photoshopped (is Photoshopped capitalized?) the keyboard in those images where people are using them? Take a close look at the guy doing some kind of architectural design work. Look how freaking big that keyboard is under his arm. That this is like the size of a dashboard of a '74 Lincoln! You have to slide your chair over to go from 'a' to the number pad. And look at the keys! He can type with his elbow and not hit two keys at the same time. I'm going to need to get a second desk to put next to this one so I can fit that thing in front of my computer. I can't get that image off the screen, but here is one with the old lady that is almost as bad. 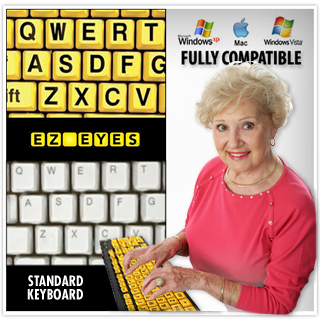 Look how far out to her right it goes! It's about as long as her arm! I know the real thing isn't the same since they show it in the video. Their graphic arts department (consisting of one guy named Fred who lives in his mom's basement) should be fired.

Lastly, I don't think bigger letters are going to make you type better. Get some Mavis Beacon software or something. Look, I suck at typing and I don't believe this monster will help me.

One more thing. I know you can't really tell here, but they purposely made the image of the regular keyboard blurry to trick you. "See, your eyes aren't what they used to be," they are trying to say. "You should really get one of these keyboards. You can see the keys better and the bright yellow keys will attract all the bees in the neighborhood. Hope you aren't allergic!"


But, on the bright side, you can get two, along with two mice, for the low, low price of $14.95. Plus shipping and handling, of course. Which will be triple the price of the keyboard. But, hey, you'll have a great new keyboard to use to write your angry letter about the shipping charges. Well, make sure to forward those to our Consumer Complaint department, also located in Fred's mom's basement.

Okay, I need to get some sleep now. I'll probably dream of some giant keyboard crushing me in my sleep and I'll have to use a 30lb walker to get around.
Posted by Mike at 9:41 PM No comments: