Our Summer Vacation Part 2: No, I'm not going to say it

It's kind of sad that it is taking me this long to post part two of our trip. Does anyone even care? Well, too bad. Here it is anyway.

Okay, so I left off on the second full day in Kona and how tired we were. Sunday was the next day and a little better in the sleep department. This day Jenn and I took the kids out geocaching around the area. We found one out of three that we tried. Some were really hard! This is also where we ran into our first gecko. They are all over the place, but I didn't mind them. I'd rather see these guys walking around than rats. 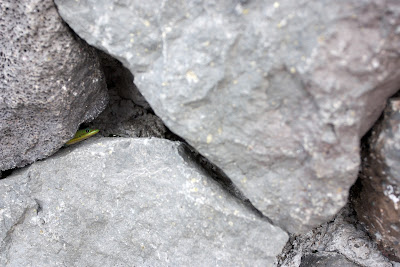 After a driving around and not finding anything for a couple of hours, as well as some hiking to the locations, we went to lunch with the kids. It was a little hole-in-the-wall place, but it was good. That afternoon the "downtown" area had a little festival of sorts where they closed the street off and had display areas where the local residents and shops could sell stuff. We bought some homemade jewelry and awesome kettle corn for back at the house. We also saw a guy jamming on his homemade guitar-ukulele double neck thing. I make fun, but he was really good. 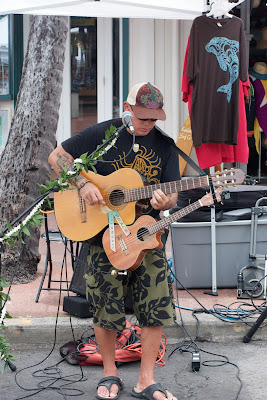 Then it was time for some shaved ice and more geckos. This guy was eating some of the syrup that spilled on table. It probably tastes better than bugs. 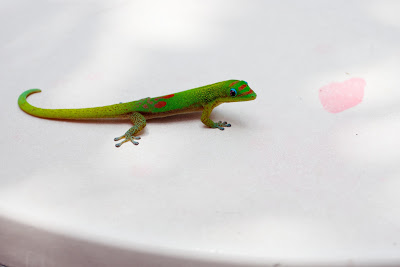 That night we went to the Luau. The mai-tais were good, the food was just okay, but the show was really good. The performers really were into it. One of the guys was pretty funny, too. Everybody enjoyed the show. 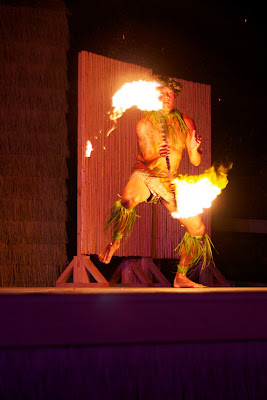 Monday was the big deal day for the kids. They were going to swim with dolphins. They were looking forward to this ever since we told them about it back in December when they opened their gift of the dolphin ride. That day, of course, our daughter was a little nervous about it, but she was much less shy about it once she was in the water. They only let parents get so close so you have to buy their pictures, but I managed to get a few to work since I had my zoom lens. Of course, we ended up buying a couple of pictures anyway. Yes, we are suckers. 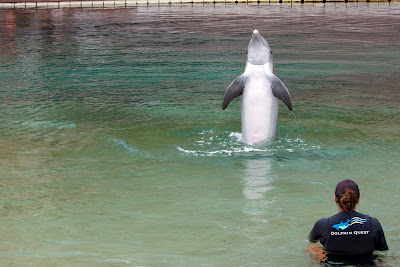 The kids didn't get a long time in the water with the dolphins, but we ended up spending most of the day at the hotel that contained Dolphin Quest. I think by the time we go home it was almost 3pm  and we left at 9am.

I think all we did was go to eat after the kids changed. We went out to eat way more than we said we were before we left. Isn't that always the way? So much for buying food and cooking it at the house.

Tuesday was the "Big Drive." We went all the way around the island, for the most part. The main plan was to go to Volcano National Park, which was on the opposite of the island, but we were going to make some stops on the way.

The first was actually unplanned. We were driving and saw a sign for a tsunami memorial and we decided to go see what it was. After some very narrow and twisty roads we ended up in a place that reminded us some place right out of "Lost." Actually it was Laupahoehoe Park, but look at this, doesn't seem like the others would live here? 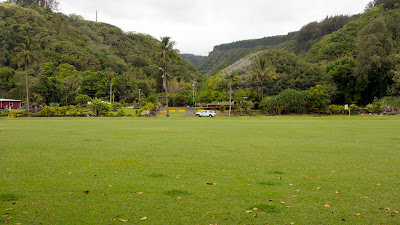 The tsunami memorial was off to the side and marked the site where 20+ people, many children, were killed when one hit in 1946. I didn't take a picture because I felt weird taking one of a memeorial. I don't know why.

There were also a lot of these big concrete things along the water. I don't know what they are for, but they reminded me of something for a WW II movie. 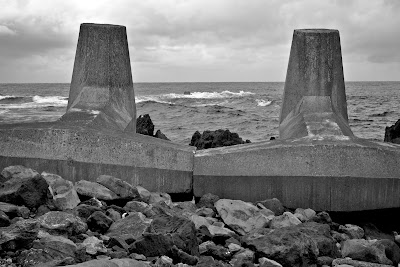 We left there and continued on to Akaka Falls. Actually, we stopped for lunch first, but everyone agreed it wasn't very good, so I won't mention the place here. The falls were...wet. I mean rainy wet. Yes, I know were were in the rain forest, but it makes it hard to take photos when it is raining so much. Jenn was nice enough to hold the umbrella over me as I took a few photos. It's a Hell of a drop, no? 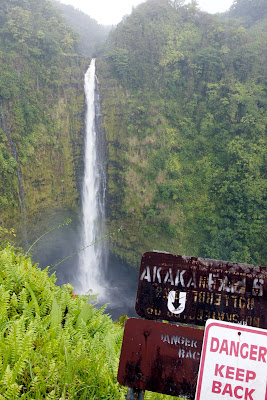 We moved on to the volcano park. Due to recent activity a good section of crater rim drive was closed off so we didn't get to drive about as much as we'd like. But we did see a rainbow over the caldera! 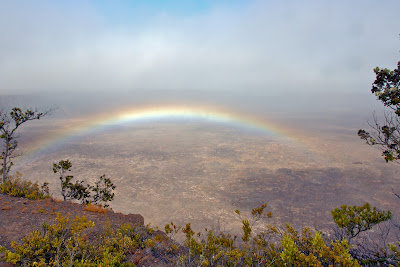 We also went to the Thurston Lava tube. It was much larger than the one Jenn and I went in on Maui years ago. We could actually walk upright, which is good since I'm an old man now. I guess we could have walked down in one of the old calderas, but we didn't. See those white dots, they are people. 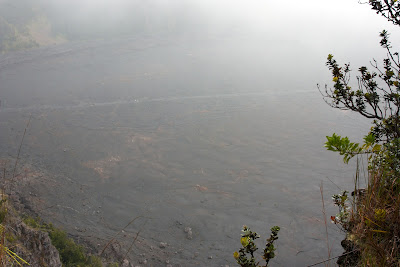 We continued our journey around the south end of the island, which was had a lot more twists and turns, and made it home just as the sun was setting. We were pretty wiped out after that day.

This is getting long, so I'll stop now. I thought I could finish in two posts, but I'm too wordy.
Posted by Mike at 11:56 AM 1 comment: