Packing for Mars by Mary Roach: A Sort of Review

No, I don't review books here often, I leave that to the professionals like Florinda, but I enjoyed Packing for Mars so much that I wanted to talk about it. 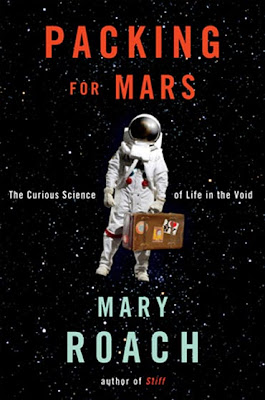 First, let's step back a little. I haven't read any of Mary Roach's books before, actually I've never heard of her. Sad I know. Anyway, I happened to catch her on The Daily Show with John Stewart back in August. Normally when I watch The Daily Show I skip the interview part, but when John Stewart mentioned the book was about space exploration, I knew I had to watch. Wow, was I glad I did. After watching the funny interview Jenn even told me that the book was right up my alley. She wasn't kidding.
So, now to the book. I will warn you about spoilers now; humans have been in space and to the moon. You knew that, right? Good. Packing for Mars, as the name suggests, is a look at the science of space travel, what we've done already and what we need to study in order to make it to Mars. But this isn't written by your average science teacher-type person who puts you to sleep after a page or two. Nor does it look at the types of things you normally think about when you hear about space travel. Let's say it's more a long the line of everything you always wanted to know about space travel but were afraid to ask.
What do I mean by that? Let's just say there is a lot of talk about poop in space. Actually poop, urine, food and vomit which, when you think about it, go hand-in-hand. Now, it's not all poop talk, because that would get old, and gross. There is a lot of talk about gravity and how it screws with your body, as well. But Mary Roach takes a decidedly different approach to the space program than your average author would. This is what makes the book great, in my opinion. Who wants to read another boring book about thrust vectors and approach angles and all that stuff? I want to know what happens what a poop ball gets loose in space! Or, would I chock to death if I barfed in my space suit?
I'm not saying this book makes fun of NASA or the space program. Not at all. It's quite the opposite. You can tell Mary Roach appreciates all that's been a accomplished, and the things she writes about are just as important as the rocket that sends the astronauts up. Without the wast collections systems, food systems, space suits, etc., they would never be able to stay up there more than a few days. But, there is also no reason that we can't read about these things and have fun at the same time, right?
So, if you want to read about all the science behind the space program that you never even thought about, go out and buy Packing for Mars. It is a really fun read. Also, it looks like Mary Roach is on tour. If you live in California you can still catch her, but at only one event it seems. Sorry I'm late on that. Looks like she didn't come to Chicago this year, which is probably good since I'd go and look like a dork laughing at the poop talk.
Posted by Mike at 12:52 PM

I've heard good stuff about all of her books, but have yet to read any of them myself. I do like books that make science accessible, so I really should give her a shot.

Nice review - you were very clear on what you liked about the book! :-)

Florinda: I've heard the same after I started reading this one. I just started "Stiff" now. So far it's good.