I didn't get a chance to go out and take many photos for Carly's assignment this week. I did get out to take one, though. We had some ice in the forecast this week, and while it can be dangerous to drive in, it looks so coo. It didn't happen though, which is probably for the best.
Here is a shot I took near a small park. I realized later that I should have gotten a little closer to the bridge. Oh well, there is always next time. 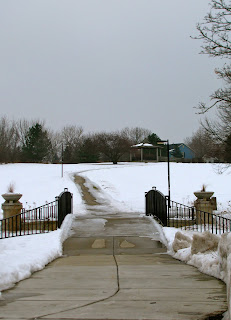 Speaking of ice, we did have an ice storm of sorts a few weeks ago, I went out the next day and took a few shots. 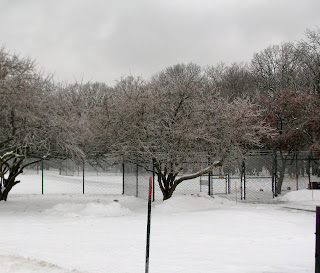 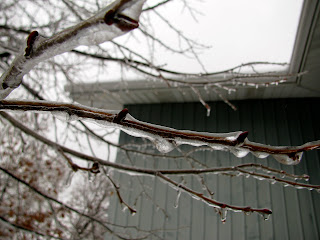 That's all I have for this week. Go check out the rest by going through Carly's site.
Posted by Mike at 8:02 PM

Yeah, I would like to have seen the bridge a little better, but you have great depth with your photo. I could just walk into the scene, and that is always good for the observer. The last one is fabulous! I don't get a chance to see ice on things, so it is awesome to see your photo. Great job that! Thanks for joining us this week!

The compositional problem in your first photo is that you ignored (or perhaps were unaware of) the rule of thirds. In a landscape shot such as this, the horizon should be in the upper third or lower third of the frame depending on whether the land or the sky is the most important element of the picture.

If you cropped out some of that unneeded sky, the picture would be pretty awesome with the sidewalk acting as leading lines, drawing the viewer's eyes toward the focal point, the bridge. And, as Carly said, the depth of field is great as well.

BTW, the site I linked to, DPS, is a great one for learning more about photography with lots of tips and tutorials.

I would say ignored is about the closest way. I know about the rule of thirds, but I fail to use at times when I'm setting up. Having only the LCD screen as my guide doesn't help. I'll check out that site, thanks.

I like your photos, Mike! They look so calm and peaceful, if a bit on the chilly side. Great job!

The third photograph held my interest, as it seemed to hold time within the frame.
You showed the ice as it started to melt.
You captured a rare moment in time yet one we all welcome.