Dinos and Airplanes, oh my!

We had an exciting weekend. I guess that is the way it should be when it is the last weekend before schools starts. For the kids, not me.

Saturday my son and I went to Walking with Dinosaurs: The Live Experience. It was really neat! I was a little worried about it for a few reasons. 1). It was downtown at the United Center, and I had to get there on my own. I'm not good at getting around in the city and I get very stressed. Luckily, it is right of the expressway. Phew! 2). I knew it was going to be loud. My son does not like loud noises. At all. He was fine, though. He just covered his ears.

They really did a great job with the show. There was a paleontologist on stage, I forgot his name, who told the story of the dinosaurs as each new period was discussed. The actor was very good. It was like he was sitting down with you telling you a story. Very personable, but at the same time, very informative.

Obviously, the dinosaurs were the main attraction. They had a good variety; Utahraptors, Stegasaurus, Brachiosarus, and the Tyrannosaurus Rex. The smaller dinos had people inside controlling the puppets. You could see their feet, but you hardly noticed. They really had the movements down. They were very life-like. Well, as far as we know.

The very large dinos were operated a little differently. I could see a capsule, for lack of a better term, underneath where someone was sitting. I know that is how they moved the puppet around, but I'm not sure how they controlled the head, arm and tail movements. Unless there were controls in the capsule to do that. Either way, it was a lot of fun.

I forgot my camera in the car. (I'm still very annoyed by that). Here are a few cell phone shots. 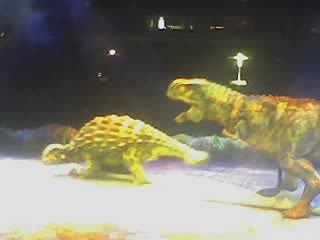 Sunday we went to see the Chicago Air and Water Show. We really only saw the air show portion but I had to give you the full name. I think it is a law or something. We didn't go down to the lakefront since it is always a mob of people. Usually we go a little farther north, you can still see everything, and you won't step on someone's torso if you move around a little.

This year, though, we went to Jenn's sister-in-law's place and went on the roof. While it wasn't really close, we could still see plenty. Not to mention we had easy access to a private bathroom. Plus, like I mentioned before, our kids don't like loud noises. Being further away from the jets made that much more tolerable. Except when they flew right over us, which they did several times.

We didn't get down there until about 2 o'clock, so we missed some airplanes, but we did get to see the Blue Angels, and a few other jets. I always like to see the B-2 bomber because it looks like something Batman would fly, but we missed it. We saw it last year though. 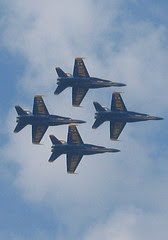 I like this shot since you can read the "US Navy" under the wings. I had to zoom in on Photoshop to get it to show up since my camera only had a 3x zoom. They were closer than this picture makes it look. 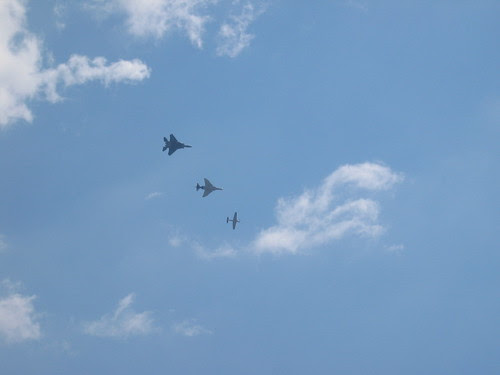 Here was three different airplanes from different eras. They kept buzzing us as an F-22 Raptor was over the lakefront. 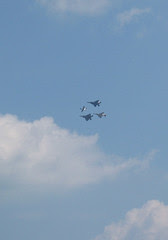 Here they are together as they leave to go home. Wherever that was.

It was a fun day. The kids got bored after awhile so it was good we were at a place they could go inside and mellow out. Or, just go up and down the stairs multiple times. For no apparent reason.

They were pooped by the end of the night, but my son had problems going to sleep. He was afraid of having a dream about tornadoes. I told him to think about the Blue Angels flying around instead. It didn't work. He came back to tell me that he was thinking about the Blue Angels, but the pilots were dinosaurs. How do you fix that one?

I have a few more pictures over at Flickr if you want to check them out.

Today? Most of today was spent nursing a monster headache. Then swimming lessons for the kids and some last minute school supply shopping. Exciting, I know.

Is that Dinosaur exhibit on year round? I'll eventually be back in Chicago and it would be cool to check it out.

DC: No, it's touring the country though. Check the link, it may be coming by you soon! It's not cheap, then again, nothing is. :)

Just checked it out. It'll be out here this weekend and next month. Kind of short notice for me, but I'll see if I can make next months.

DC: There you go! It is geared towards the younger crowd, but it is still enjoyable. Let me know if you go.