The other day I was here in the office, doing bills or something like that, and the kids were running around behind me. They kept running from there rooms, out to the hallway and back. And yelling. Loudly. My daughter was mostly just screaming, she likes to do that, while my son was yelling, "DAMN!" He kept yelling it as the ran around. At first I was ignoring it, you know, don't let them know it is a bad word and maybe they will drop it. Well, after about 25 times I had to do something. What if the neighbors could hear him?

Finally I called out, "What are you guys doing out there?"

My son stopped by the door, "We're pretending we are beavers building a dam."

"Oh, okay. Can you be a little more quiet?" At least they weren't swearing, and they made a pretty good dam. See: 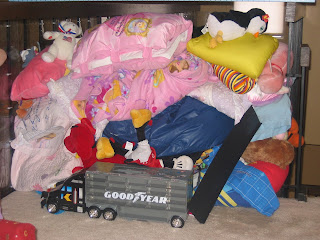 The only problem? That is the only way to get to my bedroom. They were nice beavers and took it down for me later so I could go to sleep.
Posted by Mike at 12:45 PM

That is one colorful dam!

Florinda: Yes, it certainly was.

DC: I know! I don't know where they get it. I mostly use more colorful swear words. :)

That's the funniest "kids do the funniest things" blog post I've read in a long, long time (including my own)! It's a great story.

Unfocused: Thanks. I really didn't know what to say at first. I guess I was too happy he wasn't swearing. :)