At least that is what my daughter says. She says I'm a good fixer because I fixed the toilet after the great flood of '08. Sure, she's still afraid of that particular toilet from time to time, but she is getting better. Today she said I was a great fixer because of this: 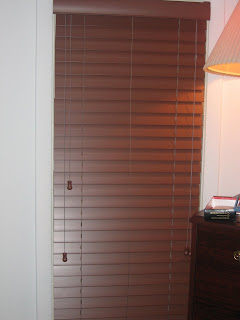 Yes, I put some new blinds up. It only took about two hours. You are probably thinking to yourself, why so long? Don't forget, no matter what my daughter thinks, I stink at this kind of work.

The big delay was due to the screws that came with the blinds. They were too long and were impossible to get flush with the bracket, due to the fact that the screw was hitting the framing for the window opening. So the screw was stuck halfway in, I couldn't get it all the way in, nor out. A few times I thought the cordless drill was going to break the window as it bashed against it. That would have been fun! Much swearing ensued until, finally, I got the screw out. Once I changed to a new, smaller screw, things went much quicker.

What did I learn from this? Don't try to do this when the kids are around. Check the screws, they may be longer than you need. And, most importantly, I really shouldn't do this kind of thing. EVER.
Posted by Mike at 5:37 PM

One of the perks of NOT being a homeowner (there aren't many) is rarely getting stuck doing projects like this. Looks like it turned out fine, though.

Imagining you purting thesse blinds up makes me think of Married with Children and Al Bundy trying to do anything. Was it something like that? lol

Florinda: yeah, they turned out ok. This particular type of blind doesn't fit well in this type of window. Oh well, what are you going to do?

DC: Pretty much. Though I think Bundy would have broken the window. I only came close. :)