It's not often that you hear someone say they are happy it's Monday, but this was a busy weekend so a day at work was much more relaxing.
We had the family over for our son's birthday on Sunday so that means we waited until Saturday to really get things together for the party. Why plan ahead when you can be completely stressed out by time the party starts? That's our motto. Also, planning is for wimps. 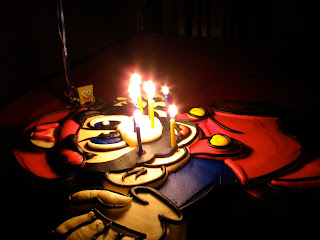 Cool cake, huh?
Saturday started early with the cleaning lady coming at 7:45 AM. Way too early, I know. We left the house and took the dogs to the daycare place while we went to a few stores. We hit Home Depot (always a favorite) to pick up a few things for the house. Then headed over to Target. I think we got home at 11:30 AM, and I was already wiped out.
There was no time to rest, though. I had to paint the kids new TV room. Well, one wall anyway. Long story. Also, I had put together a large TV stand from IKEA. Let me tell you, there were a lot of pieces, and many were quite heavy. I don't know for sure, but I'm pretty sure there was some kid of steel support running through the top. That is the only explanation for the weight. 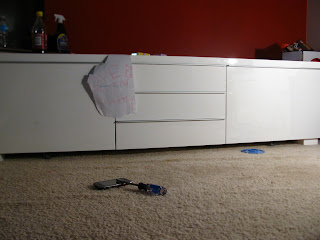 The finished product.
See, the reason I was doing all this the day before the party was because we got rid of our dinning room furniture and made the dining room an office. Makes no sense, right? Let me go on. The mother's on all sides of us were quite displeased with this idea. They thought every house should have a formal dining room whether it is used or not. So, Jenn really wanted to get as much done in the office area and the kid's room to show how it was going to work out.
I think I finished up the kid's room around 7 PM, or so. I said there were a lot of piece! And I had to paint and clean up. Cut me some slack. Jenn had bought a little shelving unit that she was nice enough to put together herself. She knew I wasn't up for building anything else that night. Though I did help her out by pointing out where she messed up and what she had to fix to make it work. The joys of working from a pictogram...
I don't think we did a whole lot at night, just some general clean-up.
Sunday was a not such an early start, I think we were up at 8 AM. Woo hoo! This was the massive get everything cleaned up day. Oh, and I got to do some of my favorite things, like hang pictures! You all know how I like doing that, right? Actually they turned out okay, which is amazing since there were three different sized frames. The only problem is now Jenn is going to ask me to hang more since I didn't screw it up.
The rest of the day was filled with picking up cakes, balloons, dropping of the dogs (again), replacing a light switch (unsuccessfully), bringing out card tables and chairs, lighting candles and getting everybody cleaned up since we all stunk of sweat.
Did we finish everything on time? Sure. But, as happens at all our parties, the last thing is in place just as the people show up. It's like that scene in Weird Science where everything is going into place just as Wyatt's parents are walking into the house. Except there is no nuclear missile in our living room. Though sometimes it looks like one has gone off in there.
So, yes, I was happy to go to the relative silence of work. I just wish I could nap there.
How was your weekend?
Posted by Mike at 9:35 PM

Jeepers, I got tired just reading about your weekend! LOL. Glad your day today was a little less hectic. Here's to a stressfree week ahead.

At least you got a lot accomplished. Cool cake! I hope everyone had fun by the time the celebration rolled around.

It's pretty bad when you have to go back to work to get some rest. Sorta like a vacation at Disney World.

My weekend was more of the restful variety -- just getting jiggy online and watching the NFL. Thanks for asking. :)

Dreamybee: I think so. It probably helped that a good football game was on. :)

fdtate: Your right, I feel the same as I did after our Disney Vacation last summer!

Isn't there room under your desk for you to curl up and nap? ;^)

What did the moms think of the new not-so-much dining room? I love the idea. If you don't use it, why keep the furniture? Why not actually USE that room?

I hate those weekends when it feels like a rest to go back to the office! But when I first saw your post title, I thought maybe you'd worked Saturday and Sunday and were starting your "weekend" on Monday.

It does sound like you got a lot done, though, even if it was all rushed. And I hope the party went well!

The mothers thought it was okay, but still weren't happy about the furniture.

Florinda: No, I was actually off for the weekend for a change. We did get a lot done, we just need to space it out more. :)