Carly wants some animal pictures this week. You'd think with two dogs living here I'd have no problem. Well, you'd be wrong. Our dogs do not like to sit still for more than 1/10th of a second. It's hard to get set up that fast. Here's a few I took this week anyway.
Here is Cruise taking a break from the action on the family room floor. 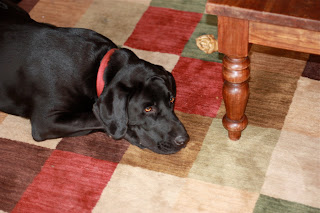 Then you have both Quincy and Cruise Staring out the window waiting for Jenn to come home. Notice how Cruise's nose is smashed against the window, as well as the old nose marks on the window. 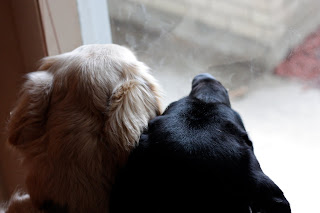 The other day I went to the local nature center to see if I can find some animals. I think it is still a bit early. I did get a shot of this duck diving for food. I know it's a bit far away, but I don't have a lens that can pull that in and I was right on the edge of the water. 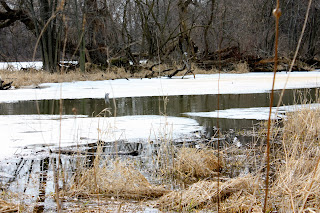 As I was leaving I heard a helicopter approaching, little did I know the helicopter had a little friend following him up there. I don't think this bird was having much luck finding animals either. I never saw him swoop down and grab anything. 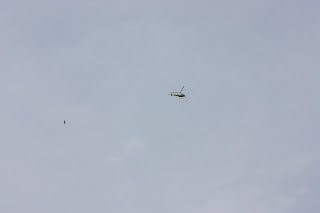 There you have it. Go check out Carly's blog for other peoples photos.
Posted by Mike at 2:09 PM

I love the picture of Cruise and Quincy, it reminds me of Dylan and Hendrix, waiting for Alan to come home. :) Cruise sure looks comfy on his rug. :) Thanks for joining us this week hon!

Aren't Goldens and Labs just the best?! I have a yellow lab and we couldn't live without her...the best!

Cruise is so striking against your colorful carpet.

Whenever I see a duck diving like that, my immediate thought is, Duck broke! Apparently, when I was about two, that was my standard exclamation whenever we went to the park and watched the ducks and they would dive like that.

That bird/helicopter picture is so cool!

Cruise is so cute on the rug, and he and Quincy are adorable with their noses against the window.